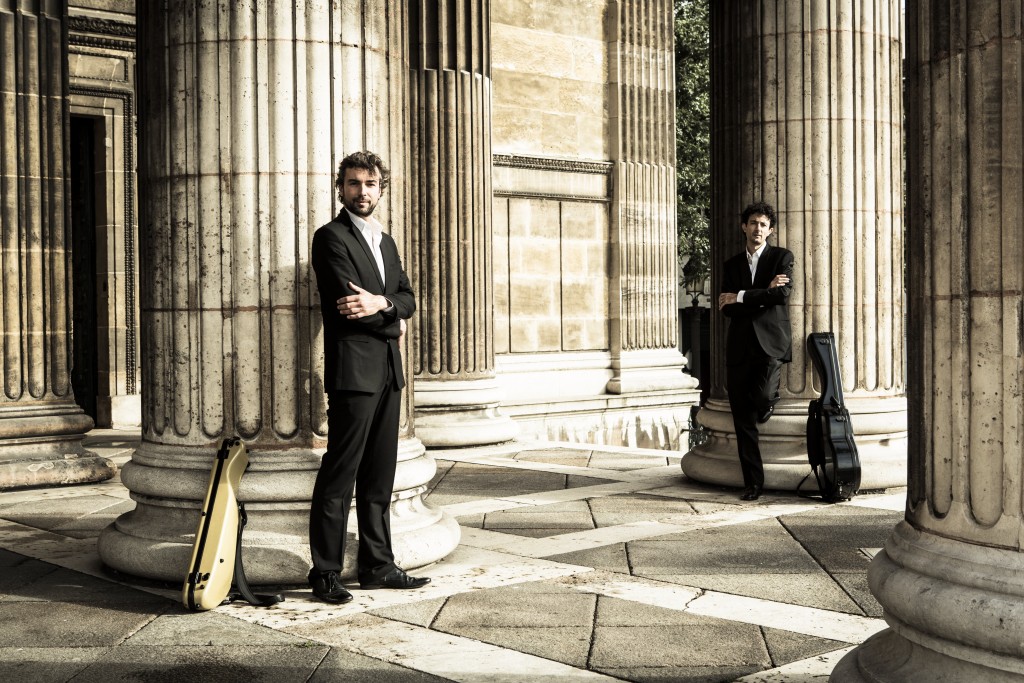 This duo, was created in Paris with the desire to explore the classic repertoire through their own arrangements, and to develop the contemporary repertoire by having pieces written specially for them.

At this particular occasion, the duo proposes an eclectic program, including arrangements of pieces from the major Italian repertoire, baroque and classic pieces (Kapsberger, Vivaldi, Rossini), arrangements of Argentinian tangos, and “Tangos nuveos” by A. Piazzolla, and also first performances of contemporary composers

Born in Cannes in 1970, Cyril started his musical education at the Grasse Conservatory, subsequently attending the CNR of Nice and graduating from the Conservatoire National Supérieur de Musique in Paris, where he studied with Alain Moglia and Christian Ivaldi. Upon his graduation from the Paris Conservatory he received the prestigious First Prize with unanimity of votes from the jury in both Violin and Chamber Music.

Winner of many national and international competitions in France (“Grand Prix” at the Musical Forum in Normandy and the String Competition of Epernay), Cyril continued to refine his playing under the guidance of artists such as Philippe Hirschhorn, Joseph Silverstein and Sigmund Nissel.

He is regularly sought after as a performer at chamber music festivals in France and abroad (Sintra Festival in Portugal, Musicades in Lyon, Flâneries Musicales in Reims), teaming up with celebrated artists such as Renaud Capuçon, Christian Ivaldi, Joseph Silverstein, Michel Debost, Bruno Giuranna, Alain Meunier. His engagements have brought him to such prestigious venues as Salle Pleyel and Théatre des Champs Elysées in Paris, as well as to Japan, Finland, England, India, The Netherlands, Germany, Spain, Portugal, Russia, Scotland and Argentina.

As a member of several chamber music ensembles, Cyril has collaborated in the creation and recording of many new works by celebrated composers Eric Fisher and Gustavo Beytelmann.

His inquisitive character has also led him to the wonders of tango music. Cyril is the most highly regarded Tango violinist in Europe today. He performs regularly with Gustavo Beytelmann, with whom he formed a trio in 2009, and has also collaborated with some of the most respected musicians in the world of Tango. As a Tango violinist he has participated in productions of the Lisbon Opera, TangoVia-Buenos Aires in Rome, Mr. Macfall’s Chamber in Edinburgh.

Cyril has also worked for several French cinema productions. He was a violin coach to Juliette Binoche for the movie “Alice and Martin” and also recorded the music for it as well as the principal theme from the soundtrack of Stéphane Brizé’s award winning film “I am not here to be loved”. He also recorded the music of Lalo Zanelli (Gotan Project) for the film “My place under the sun” and was an artistic coach to Jeanne Balibar for the film of Raoul Ruiz “Comedy of the Innocence”.

His discography includes recordings for labels such as Virgin Classic/EMI, Milan Records, Sergent Major Company, Arion, Tipica Records, Dapheneo and Ameson Records, which have been praised in the French music press by Le Monde de la Musique, Diapason and Télérama.

Cyril has been broadcast on French, Dutch, Greek and Portuguese radio networks. For their last album, the world famous group Gotan Project invited Cyril as the leader of the string section.